The #edublogsclub prompt this week (read more about the group and join here) has the participants sharing what their classroom and work spaces look like and how they are set up. Being in Student Services and out of the classroom means that I spend a lot of time in other teachers’ classrooms. While I initially thought about sharing some of the setups I see in these classrooms for this week’s prompt, an observation at home this week set me on a different train of thought.

As a kid, Sundays were all about family. My grandma would come over late afternoon and we’d all gather in the kitchen and visit while supper was being made. Regularly, my grandma would be amazed at our stories about school and how learning had changed since she was a kid. This was especially the case when the Internet became a big deal. The whole idea of the Internet was a hard one to explain to her and it never ceased to amaze her. I remember telling her about email when I had begun a long distance relationship with my now husband, and then later about talking with my in-laws in England on skype every day. This all seemed so strange to my grandma, who had had no choice but to patiently wait months for news from her husband to arrive by mail, while he was away at war. My grandma passed away a few of years ago, but I still often have moments where I think of how amazed she would be by the advancements and changes that have continued to occur. I had one of those moments just this week.

My 5 year old daughter Elsie is very enthusiastic about school. Her 7 year old cousin Charlotte was with us one day after school this week, and working on her homework so that the two could play together after. This lead to Elsie wanting to do homework as well. Being that she is only in kindergarten, she doesn’t get any real homework. Her teacher does send monthly activities home in a newsletter, so Elsie decided this could be her homework. The “homework” had her thinking about a fruit or vegetable for every letter of the alphabet, and writing them on the paper provided. By the time Elsie got set up, Charlotte had finished her homework and had joined Elsie in completing hers. I loved what followed! 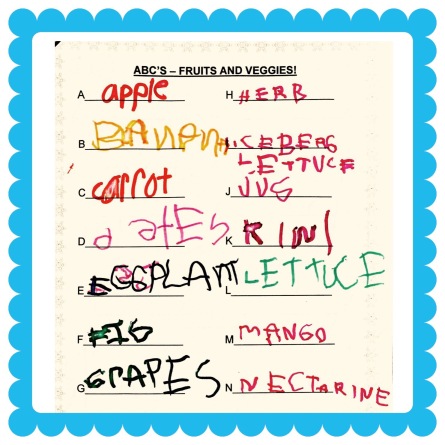 “I know! We can just ask Siri!” Elsie exclaimed.

“Siri, how do you spell carrot?”

And just like that they had the answer! I immediately thought of my grandma who would have first asked who Siri was, and then chuckled in amazement had she witnessed what had just transpired.

As a parent I often question what the appropriate amount of screen time is, and whether or not my kids are on the iPad too often. This was clearly an argument in favor of screen time and technology. I also thought of parents I have talked to about the benefits of speech recognition tools and other technology that supports reading and writing. I am often met with replies like, “But kids still need to learn how to use dictionaries.” I’m not so sure this is true anymore and I think we need to question this kind of thinking more often.

The girls were met with a problem and did a great job solving it. How can you argue with that? How many times as a kid did you get met with “look in the dictionary” from your parents or teacher?  When you’re looking for a word you don’t know how to spell, finding it in the dictionary isn’t always quick and easy. On a sidenote, I learned to use a dictionary in school and despite being a terrible speller, I don’t think I’ve used a paper dictionary in over a decade. I do, however, rely on my phone daily for spelling support. So, do kids really need to learn to use a dictionary? It seems to me that asking Siri (or other assistive technology) is a new and better alternative.

The point I’m trying to make is that I think often we get hung up on doing things like we did, just because, and without thinking about why.  It’s important that we not get stuck in old ways, just because that’s how we did things (unless they are in fact still the best way).

Before insisting on how we did things, or how things have always been done, it is important that we keep an open mind to the fact that this may no longer be the best way. Question everything.